In college, I was a slacker. I procrastinated on all of my assignments and I cut most of my classes. Until the very end, I believed that I could compensate with a handful of heroic catch-up sessions for the homework and all-nighters to study for exams. Fact is that I rarely ended up actually doing this, but the idea that I could was a comfort during the middle period of the semester which I treated like an on-campus vacation.

After I started taking the whole thing seriously, I was astonished at how much of a difference just going to class could make. Even if you procrastinate your assignments until the last minute, even if you only studied for your exam the night before. Just being present in the class, listening to your professor, asking questions and developing a relationship with them, was 80% of the journey. At least, it was for undergraduate history at GMU.

There’s an analogy here, I think, with grand romantic gestures. Often, the idea that you could do this dramatic, one-time thing is comforting to those too cowardly to do anything most of the time. Working yourself to do one thing, even one apparently bold thing, was a lot easier than the vulnerability of attempting to flirt, or just asking someone on a date in a fairly normal and straightforward way. The gesture becomes a shield you can hide behind; it puts the ball in their court, and it draws on a well-developed grammar we’ve all been exposed to by movies and TV.

I should know—I was always a coward, always really bad at flirting, and on a handful of occasions did the big gesture thing (though it was rarely all that big).

To the boy, the intended message is: “Look at how much I love you! This thing I have done just proves it!” He hopes to come off as a hopeless romantic with a pure heart. 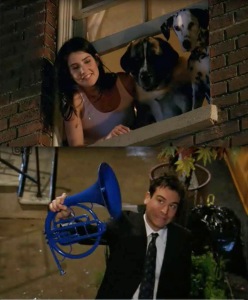 I am reminded of a saying, I’m not sure from where, that what men fear most is rejection, and what women fear is getting raped and murdered. The stakes are rather different, and so the possible experiences of The Grand Romantic Gesture are quite different.

The gesture usually involves showing up to where the girl lives or works. So part of the message must necessarily be “I’m the kind of person who will show up without warning somewhere you live or work.” I don’t think I have to explain why that might not be well received.

The difference in interpretation often comes down to a matter of trust. If you really believe that this is just a nice guy trying to do something sweet to get a chance at being with you, you might not be swept off your feet, but you probably won’t be creeped out.

With the exception of some very trusting people, most such trust has to be earned. More importantly, no relationship is going to be determined by the quality of its grand gestures. Like my college experience, there really is no substitute for the slow, day to day experience of being present and developing the relationship.