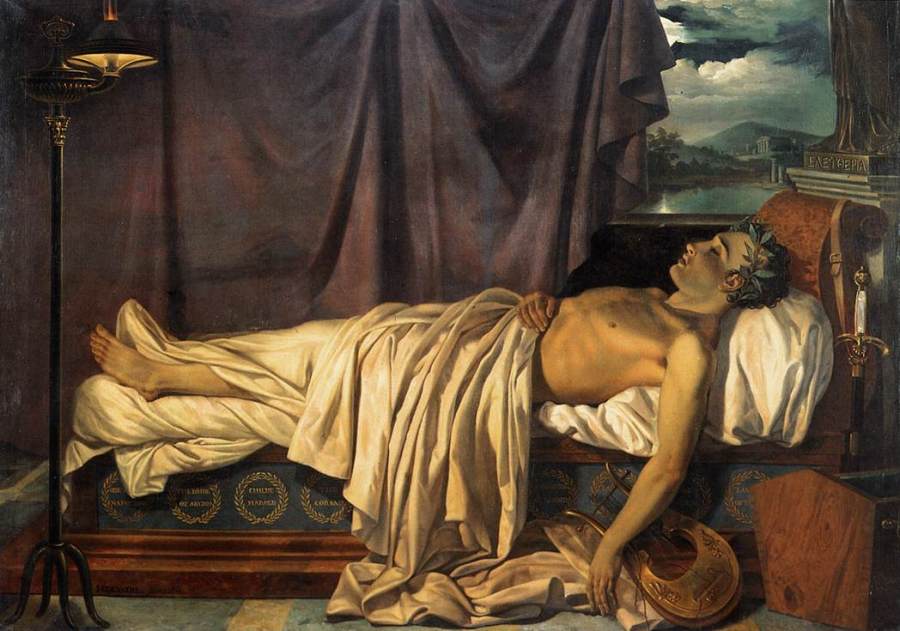 Featured image is Lord Byron On His Death-Bed, by Joseph-Denis Odevaere.

I’m not looking forward to the process of dying. Whatever one’s beliefs about the afterlife, my thoughts will inevitably turn to the course of my life – my accomplishments and failures, regrets and reprisals, triumphs and shortcomings. It’s the final act of accounting for oneself – for every good deed and praiseworthy act I can think of, it’s guaranteed that there was an equal and opposite instance  of personal or moral failure. We all want to make peace, and allow ourselves to rest, in hope that our final thoughts will be positive, happy. The harder we think about life, though, the less sure we are that we are good people. No one wants to die a failure.

This line of thinking inspires a great deal of humility. No matter how right you think you are, how much good you think you’ve done, if you were twenty minutes from dying you might worry that you weren’t right enough, or good enough, to die at peace with yourself.

This kind of humility is, in my opinion, important and positive. Taken to the extreme, though, it is paralyzing, and the one thing worse than dying in a state of philosophical uncertainty is living in one.

Adam and I must have been thinking along similar wavelengths lately. His most recent post here deals with some of the same subject matter as a post I wrote recently at Stationary Waves. Adam discussed his journey in knowledge, while I discussed the journey of life. In Adam’s journey, the more we know, the less certain we are of what we once thought we knew.

In my journey, though, the better our choices, the more specific and happy our lives become; then, the more sure of our future choices we can be. Or, as another writer once put it, “if you do not write your story toward an ending, then your life will default to the one ending that will terrify you more than any other possible.” Inevitability, pointlessness.

So, there’s some apparent tension here: Adam becomes more uncertain of things the more he learns; I, on the other hand, become more self-assured the more I make choices that yield good results. Since he contrasted his view to mine in the context of his recent post, I feel inclined to offer a response of sorts.

His point is good, as far as it goes: No matter how much we learn, there is always something important that remains yet-unknown. Furthermore, the unknown is often significant enough to meaningfully change our understanding of things. Thus, caution and humility are in order. Rather than making bold statements about what we think we know, we ought to always ask the right questions, seek greater understanding, and remember that what we don’t know might still prove us wrong.

Still, I wonder if Adam has perhaps underestimated the extent of his own knowledge. After all, he writes (emphasis mine),

But I launched into reading as if quantity equaled quality, as if I could become an expert simply by reading a lot.

I did, indeed, learn a great deal. But for the last year or so, I felt that I had stumbled on authors who helped me grow in an important way—they helped me to see more clearly a wide and yawning ignorance in myself, including an ignorance of how far the ignorance itself extends.

Increasingly, I wonder: isn’t this what philosophy is supposed to teach? For all the flaws of the historical and fictional Socrates, don’t we still admire him for saying that he only knew that he knew nothing?

So Adam did learn a lot just by reading, even before he’d come across the material that caused him to take stock of his unknowns. Knowledge isn’t a stack of cards, but a pyramid. With greater knowledge, we gain certainty about the subject matter – if we lose certainty, we’re doing it wrong.

But Adam doesn’t mean that he’s lost certainty, he only means that he’s gained intellectual humility. Nor did Socrates really mean that he didn’t know anything. We don’t admire him for his lack of knowledge, but rather for his not being a brash fool who spoke too quickly or arrogantly.

After making this point, Adam tries to build a bridge too far, I’m afraid:

So it’s very easy to write off paradoxes as simply an irrationality inherent in the flexibility of language. But if we have not yet grasped the nature of language, is this not overly hasty? Is it not possible that the nature of language will turn out to either vindicate the paradox, or show that it points to some larger, non-paradoxical truth? In short, might it not simply appear to be the case that paradoxes are an artifact of language?

In other words, is there a sense in which we may firmly pronounce whether the boat navigated by Theseus actually is his boat?

No: Theseus’ ship is imaginary. The lesson of the paradox is to make us more aware of our definitions as we attempt to make logical points. The lesson is not to illustrate a profound and highly interpretive truth about the composition of boats, nor is there any as-yet-undetermined truth about the nature of language that will eventually prove that motion is impossible.

Knowledge isn’t so shaky. We need not worry that our fundamental understanding of the world around us may at any moment collapse under the weight of a single unknown fact. Intellectual humility is a very good thing, but c’mon – the more we learn, the better our grasp of the world. If not, in what sense can we say we ever learned anything at all? (Judging by actual results, I mean.)

At this point in the blog post, were I a better Sweet Talker, I might invoke Paul’s ideas about epistemic faith. When push comes to shove, thoughts become action, even if we’re not 100% sure of ourselves; ergo, faith. What could be a more attractive resolution to the matter than to pair Adam’s humility with Paul’s faith on the road to flourishing Virtue?

Alas, I’m not a better Sweet Talker, and so I am compelled to make a different point instead.

In considering what Adam has in mind by “knowledge,” and perhaps what he more broadly has in mind by “virtue,” I am reminded of the “mindset” research of Stanford psychologist Carol S. Dweck. In a nutshell, Dweck’s research has lead her to believe that successful, happy, stress-free people tend to have a “growth mindset,” causing them to believe that with hard work and effort they can achieve anything. (Because their talent can grow.) This contrasts to a “fixed mindset,” that corresponds to the belief in the innateness of personal traits, or the belief that great athletes are great because they were born that way, great minds are great because they were born smart, and so forth. (Because such traits are fixed.)

So, if you believe, as I do, that getting results is what’s important in philosophy, then you might choose to think of knowledge and virtue, not as “fixed” values we attempt to reach, but as quantities that “grow” as we acquire more of them. In this view of it, knowledge and virtue aren’t things that we have or not. They’re traits that become more pronounced with more hard work. We might never attain the distant, shining orbs of “truth” or “virtue,” but we will certainly acquire more knowledge and wisdom if we try.

Moreover, the more such knowledge and wisdom we acquire, the more certain we ought to become in our understanding of the world.