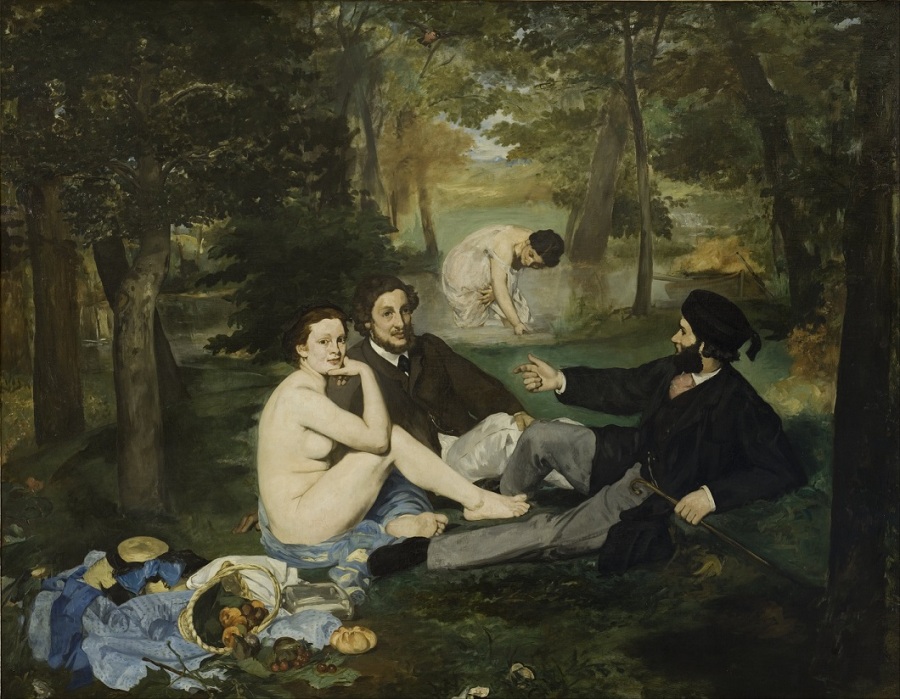 -Walt Whitman, “Song of Myself“

Featured image is Luncheon on the Grass, by Edouard Manet.

Practices are organized around constitutive goods that we strive to articulate, however imperfectly. But how adept are we at this, by nature? Is there a natural harmony between theory and practice?

Practice can be at odds with itself.

To put this more precisely, there can be rival, mutually incompatible constitutive goods which practitioners are seeking to order their practice around.

We must distinguish this scenario from either utilitarian optimization or the unity of the virtues. The difference between these two is commensurability; the former admits rote quantification, the latter does not. The former, in other words, allows a simple formula for finding the optimal trade-off down to however many decimal points you like. The latter is purely qualitative in nature, but it is still fundamentally harmonious, like the different ingredients in a recipe put together in just the right proportions in just the right conditions and cooked just right.

When I speak of constitutive goods that are at odds with one another, I refer to something fundamentally inharmonious. It is more akin to Greek tragedy than Greek philosophy. We feel the call of these constitutive goods, these moral sources, but they sometimes have mutually exclusive requirements. How are we to cope?

At the level of enacted practice, the main ways to cope are exclusion and compartmentalization. In the former case, contradiction is minimized by cutting out certain constitutive goods from the ordering of a practice. In the latter, overall contradiction is minimized by giving mutually incompatible constitutive goods supremacy over separate domains of practice.

The moral source of liberty as such, as understood in the American tradition anyway, is often in conflict with other visions of liberation. The freedom to live like the Amish do is mutually incompatible with freedom as modern feminism envisions it. Compartmentalization in this case is simple pluralism—there are places you can go to live as the Amish do, but the communities we participate in ourselves we actively seek to make more feminist. But thoroughgoing feminists will seek to eliminate Amish practice entirely, seeing its constitutive goods as intrinsically corrupt.

All this is before we even introduce anything like formal contradiction, something only possible after verbal articulation.

So-called internal consistency is a virtue much admired by philosophers, logicians, and mathematicians, but it is the easiest problem to solve. Perhaps that is why they are so drawn to it.

More serious problems at the level of theory usually involve either what Alasdair MacIntyre referred to as a lack of resources to address problems internal to the framework, or, what Charles Taylor called conflict with some implicit constitutive good. A good example of the former would be the lack of resources within the Ptolemaic system to account for the movements of Mercury, once better telescopes allowed more accurate tracking.

The other sort of problem is quite common in moral philosophy, though unacknowledged. When a modern philosopher fleshes out a moral framework, she can anticipate a battery of objections that amount to working out implications of the framework that people find unpleasant. Why do people find them unpleasant? The philosopher might argue that it’s uncritical convention, or status quo bias, and so it can be ignored. In practice they can only do this so much, because the goal, after all, is to persuade people they are correct. So often they try and revise their theory just enough to overcome these objections.

Taylor would argue that it is not merely an irrational bias or convention, but the pull of an implicit moral source that the theory has failed to accommodate. Once this is acknowledged as important—for instance, in the case of a pluralist who is trying to accommodate feminist objections—MacIntyre’s problem joins Taylor’s; the philosopher must find the resources within her framework to accommodate important moral sources.

MacIntyre’s chief concern was with the legion of incompatible theories we can choose from. How are we to do it? His answer involved a simple case where we have two alternatives. The framework that has enough resources to accomodate its own internal problems, as well as a superior ability to accomodate the internal problems of the alternative, is the more rational choice. But when theories have multiplied to such an extent as they have now, how long would it take to see this approach out?

We can take a pluralist approach—that is, we can strive to be a fox rather than a hedgehog—but this too has problems. Again, we return to the case of the pluralist freedom to be Amish standing in opposition to the feminist liberation from patriarchal power structures. How can the “fox” in this scenario adjudicate the rival claims of each? In practice, each fox or pluralist approach turns into a specific compartmentalization scheme, which can itself be judged as a whole.

Which means that in the end, exclusion must play a part. Choosing a specific pluralist scheme means excluding others, just as being a thoroughgoing feminist means rejecting the validity of a wide swath of other frameworks.

The Game of Truth

Inarticulate enactment and the various levels of articulation don’t exist in separate domains. Practice is always a patchwork of enactment, articulation, and artistic portrayal. Different ways of coping with contradiction at and across each level lead to variation in practice across communities and history. And as new practices are created, they each give rise to multiple articulations, and the interplay again leads to further variation.

There is nothing like natural harmony here. It is a mess that we must muddle through as best we can.

This requires a great deal more care than we seem disposed to show. Consider the American political system. Let’s say, for simplicity sake, that there are two constellations of constitutive goods which underlie it. There is the federal system put in place by the founding fathers, inspired at the level of enacted practice by the democratic assemblies in the colonies and kindred practices in Mother England, and at the level of theory by 18th century liberal thought. Then there is the administrative state, inspired by political practice in Germany in the late 19th century and by theories of rule by expert.

The progressive architects of the latter system were quite undemocratic, but the post-progressive left has largely tried to harmonize the constitutive goods of the two sides. Witness a recent example from law professor Adrian Vermeule; the administrative state is a simple case of democratically elected officials delegating responsibility. Vermeule believes that there are enough congressional and judicial checks to keep the spirit of the thing essentially democratic.

One wonders how 535 members of congress are supposed to keep track of millions of bureaucrats. It seems to me that there must be vast areas of governance which democratically elected officials are largely ignorant of, most of the time.

Allow for a moment that my reading of the situation is the correct one, and the constitutive good of the original federal system is mutually incompatible with the constitutive good of the administrative state. We live now in a tense compromise, which creates dangerous possibilities. We have already seen, in the 20th century, what happened in countries which simply jettisoned democracy in favor of rule by the administrative state.

Yet here we are, in the 21st, and many of the so-called liberty movement continue to exert their energies delegitimizing democracy. When I have spoken with some people who argue in this way, they sometimes say that the specific reforms they would make are in the spirit of the republic—which, after all, isn’t a direct democracy. But this defense would require an intellectually sterile analysis of the arguments removed from their context, a pointless exercise.

Arguments—rhetoric—have effects beyond what a surface reading of them would imply. When you title your book Against Democracy rather than Some Modest Refinements to the Republic, when you emphasize that voters are too irrational and ignorant to be trusted, you are inviting readers to harden their hearts against democracy. And, as I have said many times before, it is highly unlikely that you will be warming their hearts to the minimalist state, much less anarcho-capitalism. In our current situation, it is much more likely to result in totalitarianism.

I don’t think that Vermeule’s way of coping with this tension is sustainable. But I’ll take it every time, over the political nihilism of many prominent libertarians.

Because I don’t simply want to be another amputator, I will point to Philip Wallach’s excellent essay on the topic, which lays out a good path in carefully considered rhetoric.

But all this is somewhat of an aside to the main argument I want to make here, which is that both theory and practice are fundamentally inharmonious. The crooked timber of humanity always provides a shaky foundation at best. The situation in American government was merely meant to illustrate this. Before the administrative state, it already contained contradictions.

Enacted practice, articulation, and artistic portrayal do not progress towards perfect harmony, like an orchestra of skilled musicians who practice the same piece together many times. It is more like information entropy in programming, where the added complexity of a bug patch creates future bugs. It’s more like it, but not the same either; all I wish to say here is that harmony is not destiny.

It is not in the teleology of theory and practice to be reconciled.

4 thoughts on “Coping With Contradiction”