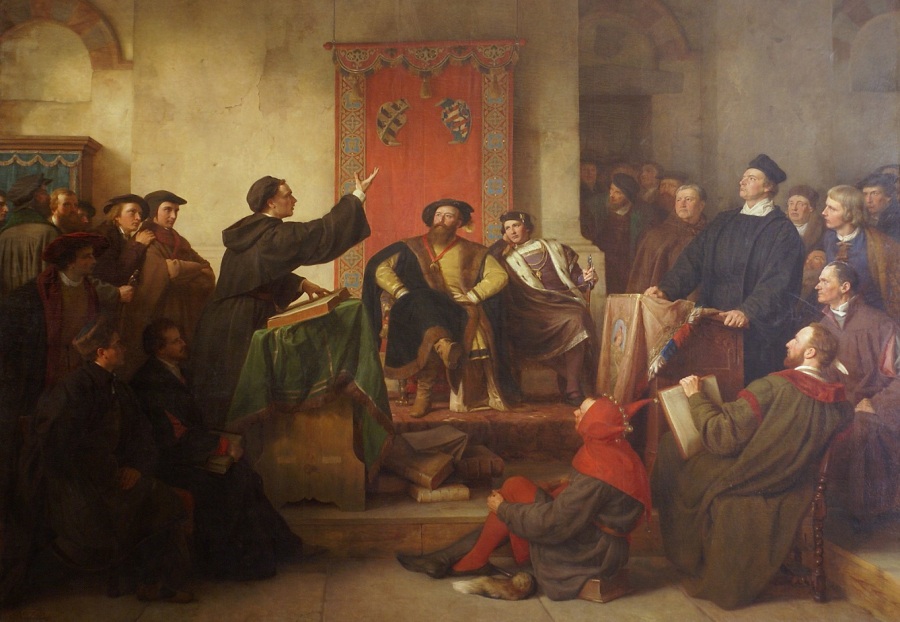 Featured image is Disputation between Luther and Eck at the Pleissenburg, by Carl Friedrich Lessing

This post has a companion piece the delves further into the details of rhetorical analysis.

I recently argued that scientists ought to take responsibility for the effects of their rhetoric. The response was largely negative. Most simply denied outright that scientists have any such responsibility, beyond arriving at accurate conclusions or generating more information. Many were concerned that such an argument would hold people responsible for the very worst appropriations of their work. If we did that, wouldn’t we say the Beatles were responsible for Charles Manson, given his fixation with Helter Skelter?

Sam half-agreed with me, but thought the burden imposed on scientists would be too great in practice. He also misread the argument—he described it as a two step process, “to seek the truth and, once found, to render it palatable to the public through the use of controlled rhetoric.”

There are not two steps, but one; rhetoric is what scientists practice from the very start. And moreover, what I am asking is not unreasonable, nor will I pretend that the uncertainty around this is any smaller than it is. All I ask is for people to acknowledge that their rhetoric has consequences. I also ask that they do their due diligence. This means nothing more than doing what can reasonably be expected of them, given how little is directly under their control.

Rhetoric All the Way Down

As I have said elsewhere, there is no valid distinction between rational evaluation and rhetoric. The way we evaluate things is by attempting to persuade others as well as ourselves. In a companion piece, I have attempted to demonstrate this at length by drawing on excerpts from academic papers, an essay, a tech blog post, and newspaper articles. That piece focuses on the nuts and bolts of this; here I will focus on the bigger picture.

What is an academic paper, if not rhetoric? The author must invite people to read it, in such a manner that they are more likely to actually do so. She must establish the credibility of her research, to say nothing of her own credibility. And she must persuade readers that her conclusions follow from the results of her research.

How does one go about getting a PhD? The dissertation process requires navigating the turbulent waters of department politics. Ultimately, you have to defend your work in front of a group of department veterans, who have the luxury of taking their time to pick you apart.

The name of the game, in each case, is anticipation. If you can anticipate your dissertation committee’s objections, you can have specific answers prepared. If you can anticipate what will catch the eye of a peer in your field, you can take that into account when writing your abstract. If you can anticipate which technical terms will illuminate rather than obscure the point you are making, or what research methods will be taken seriously, or what caveats will help to defend the ones that aren’t, you will have a better shot of winning your readers over.

And if you can anticipate what moral implications people will draw from your work, you can do your best to forestall the bad ones.

The creative powers of human beings should not be underestimated. As such, the entire range of meanings that people are capable of reading into the same words or same arguments is impossible to anticipate in advance.

Let us grant that from the outset.

Nevertheless, where does that leave us? Scot free, where responsibility is concerned? I think not.

Let us return to my argument about Charles Murray. In hindsight, I should not have made such an argument without liberally excerpting passages from his work. But never mind whether my criticism was correct, for now. I made it because I thought he was a clear example of a certain kind of problem; it was poor judgment on my part to think that so contentious a subject could ever render “clear examples” without marshaling a stronger defense.

My argument went like this: if you look at Murray’s perspective, which I outlined, certain dangers should be obvious. If someone looks both ways before crossing the street, and only goes after he gets the light, then when a drunken driver comes barrelling through the light from the wrong direction, we certainly wouldn’t blame the pedestrian. But if the pedestrian doesn’t look either way and walks against the light, we would certainly say he failed to do his due diligence, whatever the faults of the driver. Murray was staring very intensely at the politically correct crowd, but from his vantage point he had only to turn his head to see other ways his work could be misused.

The companion piece goes into greater detail on what exactly is entailed in a given standpoint and how it makes certain possibilities easier to see than others. But I don’t think the basic idea is all that complicated: Murray believed that our current system encourages us to think people with less than average intelligence are morally deficient. Thus it should have been obvious that some people could both think that and be hostile to political correctness, and so misread his work on different average IQs by group as an indictment of those groups. Murray was too fixated on making political correctness his enemy to do his basic due diligence against a much, much worse group.

Let’s focus on a more recent and clearer example of irresponsible rhetoric. This past week, Glenn Reynolds was temporarily suspended from Twitter because of the following: 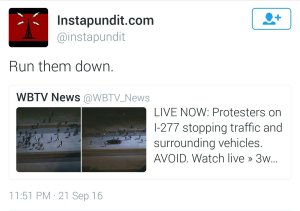 In his post justifying himself, he talks about what one ought to do in a situation where people are rioting and you’re in a car, and so forth. But that’s rather besides the point. Does Reynolds have some special expertise here? Is there some way in which “run them down” would have actually been of help to anyone? Does he delude himself into thinking he was doing anything other than venting, expressing a feeling, and working up his like-minded audience?

“Run them down” is not a contribution, and tweeting it is certainly no way for a public figure with influence to behave. It is not how anyone should behave.

Reynolds and his friend immediately redirect the topic to the issue of how one-sided Twitter and other platforms’ enforcement is. This is a slick rhetorical move, to be sure, and stokes up their side quite effectively.

But it is a side issue. Of course Emmett Rensin and Matt Bruenig also behaved terribly—all the worse, in fact, because they were much more calculated about it. But that doesn’t make what Reynolds did right.

We live in an era that prizes “being yourself” in public and deplores any perceived artifice. Far from being a more worldly perspective, it requires the utterly naive assumption that the rhetoric of what we do and what we say has no consequences. Once you acknowledge these consequences—and we must, we have ignored them for too long—it becomes simply obvious that you should be thoughtful about how you act and what you say.

If you want to take a deeper dive, you can continue to the companion piece.

7 thoughts on “Rhetoric and Due Diligence”