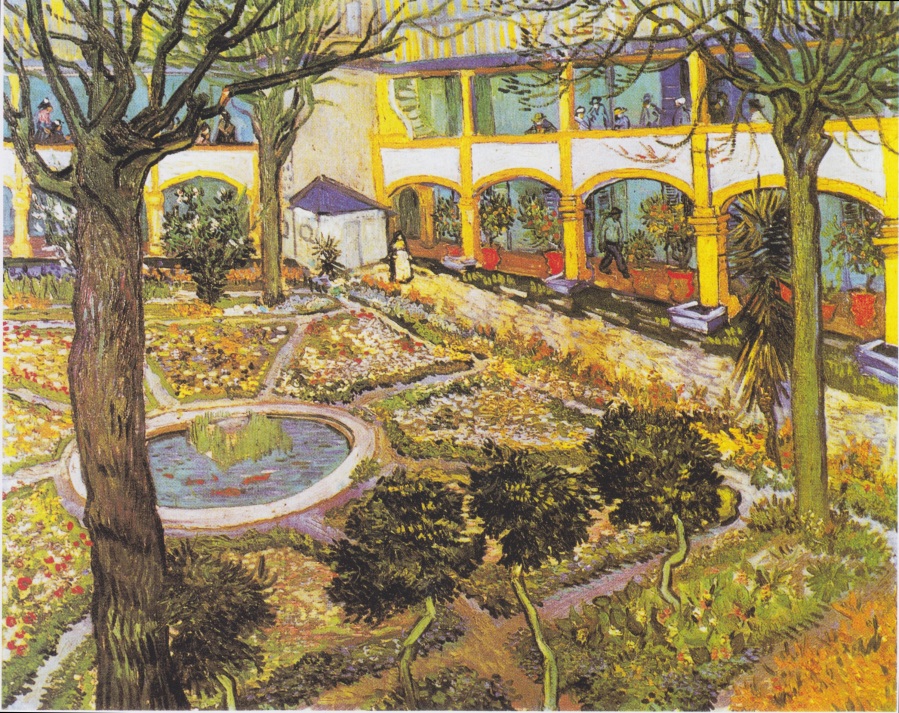 Featured image is The Courtyard of the Hospital in Arles, by Vincent van Gogh – repr from artbook, Public Domain

Adam rightfully calls our attention to the “tragic liberalism” of Jacob Levy. This style of liberalism is tragic because the legitimate values of the polity are incommensurable, plural, and inconsistently applied due to the inevitable diversity of the political body. These features lead to “irresolvable tensions.” These tensions are tragic not only because they are a constant, Sisyphean feature of the human experience, but because all attempts to navigate the tensions invariably hurt the legitimate interests of real human beings. We live in a world of trade-offs.

To take a frequent example Adam and I have used, the individualist concerned with liberation will desire to impose a certain level of uniformity on the populace for the sake of the disadvantaged members of society. A closed society like that of the Amish will face interference from without aimed at liberating those individuals perceived either as oppressed or at least as insufficiently capable of making and acting on informed decisions about their membership in the community. But this imperils the very existence of those sorts of communities, which individuals have genuine reasons to value that have nothing to do with the desire to dominate others. And a universalist imposition will hamper the discovery potential of a more federalist approach that affords such communities wider latitude. Both partisans in a political dialogue about how much to interfere in such communities are reasonable.

These tensions are tragic. But they are also fertile. The tensions of liberalism, if they are tended with a gardener’s care, can give rise to an explosion of human capabilities, a flowering of innumerable different ways of life and comprehensive understandings of the good, and actual progress in moral understanding and moral practice within these diverse understandings even if, as our outgoing POTUS has reminded us, progress doesn’t always happen in a straight line. The possibilities and the hope of liberalism are what keep us trudging forward despite political—not to mention economic and humanitarian—setbacks.

Rational political disagreement is a brute social fact. The dream of the Enlightenment was to submit all problems to reason, and reason would reveal the solutions. But what we have found instead from the free use of reason among individuals is a diversity of perspectives that yields a host of different interpretations and understandings of the world, and this is true even if we restrict ourselves to good ethical inquirers.

Given our attachments to our perspectives, it’s implausible that any given perspective apprehends every salient feature of every problem in the world. Different perspectives draw attention to different features and different machinery for solving problems. In The Tyranny of the Ideal, Gerald Gaus argues that even if we can’t agree on comprehensive worldviews or conceptions of the good life, we can (and do) for the most part agree that living together in peace is better than living in isolation or in violent conflict, though some fringe perspectives who can’t agree to this much might unfortunately have to be coerced or excluded. And while we live together in what he calls the Open Society, we can learn from each other. Different perspectives illuminate different features of the world with different light and from different angles. What one perspective fails to even perceive as a problem may be quite clear from another.

To take one example, the typical libertarian has very little theoretical machinery for understanding worker alienation, and so will usually fail to see it as a problem at all, let alone produce a solution. The unreformed Marxist can describe worker alienation, but they will struggle to understand the role of markets and private property in economic production and innovation. When these individuals talk to each other with open minds, they may begin to see the problems, even if they come to different solutions. (You can see the dynamic at work with this very example in Socialism after Hayek, by Theodore Burczak.)

Importantly, this dynamic works not by the one true theory winning adherents over others, but by the exchange of ideas between theories. I learn from the good ideas of other perspectives how to improve my understanding of my own comprehensive worldview. Gaus demonstrates this with a discussion of the various amalgamations of theories one sees in the wild (bleeding heart libertarianism, market socialism, liberal feminism, etc). The possibilities are endless and will continue to expand as the social world evolves. And one sees that certain modular ideas do gain a greater presence in multiple perspectives (most perspectives now maintain the equal worth of individuals regardless of sex or race, no matter the origins of those perspectives). Progress occurs by generating a multiplicity of perspectives that learn from one another in terms of both problems, tools, and values.

The solutions to our very real problems are hidden in bits and pieces across all of the many different factions and perspectives that make up our societies. We ought, then, to be focusing on better ways of drawing from these disparate factions and taking advantage of our disagreements, so that we can together come up with better solutions.

As an example of this phenomenon, one of the great virtues of the Black Lives Matters movement—just as with every other important civil rights movement—is that it has helped the rest of the United States see a source of burdens that many of us were blind to.  I do not have much interaction with the police in my life. So it is important to find out that for some communities, there are more outstanding warrants than citizens. Or that civil forfeiture and municipal fines make up sizeable portions of some local governments’ budgets. Or that some citizens are regularly stopped by the police without having done anything wrong. Or that police have extremely large leeway in their choices about using force.

For many of us, this wasn’t information that we had ready access to until it was brought to light by a political faction. Many of us did not suffer burdens from these policies, and so were largely unaware that such burdens existed for our fellow citizens. Despite our ignorance of what was happening, it was taking place in our names. We now have an ongoing debate about what to do in light of this knowledge.

The same plural values and perspectives that push and pull us in different directions thus provide us the means of solving the problems our society faces. Our differences provide us fertile ground for growing solutions. If this argument is right, then we don’t have to eliminate all tribalism and all bias from ourselves. This would anyway be an impossible struggle against human nature. Gaus and Muldoon allow, even encourage us to commit to our respective worldviews.

For a diversity of worldviews to be productive, however, certain liberal virtues must be cultivated, certain liberal norms adhered to. Among these are open-mindedness, a sense of political fraternity (a commitment to remain within a political unit with our opponents), and good faith in dialogue, both in telling and hearing. If partisans (broadly construed, not just political factions) are close-minded, if they refuse to listen at all to opposing arguments or insist on cynically interpreting all such arguments as rhetorical weapons and sophist tricks, then those partisans will have no chance to discover better ideas and adapt them to their own perspectives. If partisans frame their political opponents as enemies (or worse, dehumanize them as vermin or monsters) to defeat at all costs, then those partisans will lose any incentive to compromise, adapt their ideas, and may even wish to sever political relations and thus the benefits of living together in peace instead of war.

Political polarization in America appears to be both a cause and a consequence of the breakdown of these virtues and norms. Republicans, for example, allowed themselves to coordinate on a candidate anathema to many of their own erstwhile cherished values, all because the Democratic candidate was somehow conceived as beyond the pale, despite being moderate or even conservative by her party’s standards. While Democrats and the left more broadly have ample blind spots of their own, I won’t make false equivalences. The right in America has recently been significantly worse in succumbing to political vice and exacerbating polarization. But popular discussions of west coast states seceding from the Union and the desire among Democrats to pay Republicans back with obstructionism to the point of government failure risk escalating the polarization. Like cycles of violence, cycles of political polarization and the abandonment of liberal political virtues have no natural stopping point. At some point we must stop titting for every tat lest we establish ourselves permanently in a low trust social equilibrium with all its attendant dysfunctions. Resisting cynical interpretations, applauding our political opponents wherever possible, and (re)establishing political and non-political relationships with those across the aisle are steps in the right direction. We can’t wait for the other side to make the first move.

Liberals—I’m speaking of proponents of the broad philosophical tradition of the Open Society, not any contemporary political faction—often express a kind of allergy to asserting particular values because doing so departs from the abstemious neutrality between rival ways of life and conceptions of the good that is supposed to characterize liberalism. This restraint comes from a laudable desire to allow all individuals to come to their own conclusions about the good, but it is a mistake. Like toleration of the intolerant, it rests on a paradox. Liberalism seeks to secure the institutional conditions under which individuals can make their own lives according to their own freely chosen ends. But no set of institutions—not private property, not a free press, neither constitutional nor common law jurisprudence, and certainly not constitutional democracy—can function by its own steam, irrespective of the ethical commitments of citizens, as if once set in motion by some constitutional convention of clockmaker gods it could run smoothly thereafter for all eternity.

Liberalism is instead like a garden, its institutions being the flora. The values and ethical commitments of the citizens are soil, and need tending. Extreme conditions must be avoided, and overgrowth (some value or institution taken to absurd or monist conclusions) of one good can hurt the growth of others. Parasites like polarization can threaten the entire enterprise. Liberal institutions need belief, toil, and defense by committed liberals or else the blessings of liberalism will vanish as its institutions and values decay.