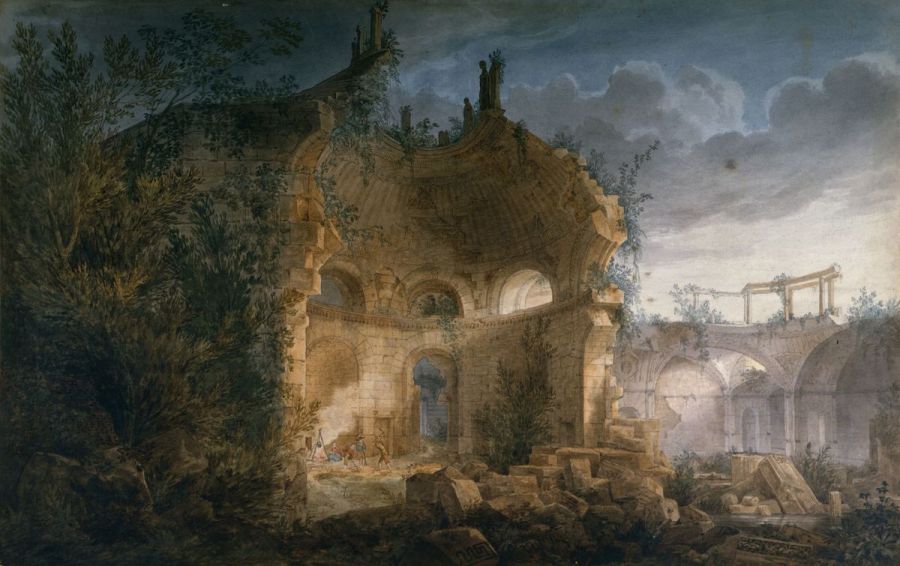 Featured Image is Sir John Soane’s Rotunda of the Bank of England in Ruins, by Joseph Gandy.

All human projects are akin to a plane that begins to fall apart the moment it takes off.

As time marches on, the people responsible for the plane must decide whether to repair it, replace old parts, or decommission it and replace the entire plane.

Or they can put off such decisions until it is too late. Until, at best, the plane does not make it to the runway one day. And at worst, a catastrophe occurs in the air.

Everything from family to community and nation, to the human body itself, has this trajectory from the start. No system—biological, social, or political—manages to avoid this basic reality.

We focus on Rome for its greatness, but also for its spectacular collapse. But Rome stood for a thousand years. Every step of the way it was falling apart. Many times it seemed on the brink of dissolving in the air like our neglected airplane, and very nearly did. What is remarkable about Rome is not that it fell, because all civilizations fall. What is remarkable is that it lasted, that it staved off complete disintegration for so long.

Chinese history is another interesting case of decay and renewal. Certainly, China blew apart and fell into civil war many times over its astonishingly long history. But the old empire also displayed a remarkable ability to absorb its conquerors into the existing system. The ones who were conquered were nearly always the ruling class, not China as an entity, which had such a character that it could assert itself even when a foreign military took the mantle of government.

From the ground view, I wonder if those moments that broke out into civil war appeared so very different from those which did not.

We’re always in the process of coming apart. Sometimes we get our act together and stave off the end a little longer. Sometimes something entirely new is born. Sometimes the garden must lay fallow for a season before a proper renewal. And sometimes it is simply the end.

A friend of mine in Nicaragua posted a picture on his Facebook timeline which took my breath away. Ordinarily, my timeline is filled with pictures of farm animals, babies doing cute things, insufferably saccharine-sweet religious memes, and a handful of ham-handed political advocacy of the local variety and the national. You know, harmless stuff.

News from Nicaragua is always cool because I like to see how my friends are doing, not diminishing the slightly exotic sensation that comes from participating in the lives of people in Central America, which is a long way from Alabama, and even further from Buffalo. The picture he posted reminded me of a brief, terrifying moment I experienced within the first hour of the first day of the first time I visited down there. My host was driving us from Managua to Matagalpa (pop. over 500,000), the Pearl of the North, surrounded by coffee plantations and utter poverty, and he pointed to the road ahead: a caravan of automobiles was speeding toward us.

“Wow, that’s awesome!” I said, and I reached down to the floorboard of our SUV to grab my camera.

Dear God, and didn’t I sit up. Stupid, stupid, stupid, I was repeating to myself. Stupid gringo. It’s one of those experiences that makes sense immediately, but can’t make sense until the bullet has exited the chamber, or, luckily, in my case, when your host screams at you in order to save his own life: El Presidente is always the next guy to get assassinated, and the assassination is usually financed by foreign money, usually white foreign money. A solitary white guy being driven in an SUV by a Nicaraguan is, apparently, a candidate to be connected to a bank account stuffed with cash and a magazine full of ammunition locked and loaded. Had the presumption followed course, resulting in mine and my host’s violent deaths, a few people would have protested, and my wife and kids would have been unhappy, but, otherwise, it would have been chalked up as a tragedy due to the hazards of international travel. “He shouldn’t have reached for his camera. Was he loco?”

By my reckoning, no presidents in Nicaragua have been assassinated in the last few decades, but, while my host was pointing out volcanoes and animals he knew would delight me, he also made the effort to point out Spanish fortresses which were now owned by the Sandinistas. “There are torture chambers in there,” he said. Some measure of violence yet attends to power shifts, enough that the general population is familiar with the occasional discovery of an executed person. That is not to say that they are comfortable with brutality, but that they are familiar with it, even being afraid.

But who am I? I’m no expert on Nicaraguan affairs. I’m only an infrequent visitor, listening to stories. Perhaps my host was entertaining me through my own fears, laughing to his wife when he got home, “I got another one to believe he was nearly killed!”

Nevertheless, I was disturbed to find a picture of one of the recently murdered North American soldiers in my Facebook timeline, posted by one of my Nicaraguan friends. The dead man was curled in a fetal position, flanked by colleagues and investigators. Blood had poured onto the concrete out of two holes in his head. Whoever had originally published the picture had the courtesy to obscure the deceased’s face.

I had to delete the post from my timeline.

Amidst puppy dogs, toddlers, and birthday cakes was the terror of violent death.

Attila the Hun teaches us, I think. At one moment, there was Europe, and then, moments later, Attila blew his battle horn and there were Huns in Europe, and it was ablaze. In hindsight, we now know that there was always such a thing as “the Huns,” but before Attila, they were a subgroup of a subgroup of people, “Eurasian nomads,” invisible, unified loosely around their love for the same football team, apparently. Nobody even knows where Attila came from, but wherever there was, he was now in Europe, burning it down. At Mantua, a religious man convinced him to cease and desist.

It is quickly pointed out by the pointy-headed set that it was logical for Attila to cease and desist because of the various realities on the ground, i.e., a famine which had reduced the food supply so that it would not support a war footing, but it took Pope Leo I to point that out to Attila, and now there are no more Huns. Rome fell shortly thereafter.

Gibbon, Jr. will instruct generations who follow that they should not be surprised that we fell, but that we subsisted for so long. The victorious politician, who, in distant wars, acquired the vices of strangers and mercenaries, first oppressed the freedom of the republic, and afterwards violated the majesty of the Magna Carta Libertatum. The bureaucrats, anxious for their personal safety and the public peace, were reduced to the base expedient of corrupting the discipline which rendered them alike formidable to their sovereign and to the enemy; the vigour of the military government was relaxed, and finally dissolved, by the partial institutions of Constantine; and the Roman world was overwhelmed by a deluge of Barbarians.