I was doing what David Levy’s students do at the Library of Congress this Tuesday (there were two other Levites nearby) when I came across this paragraph in which Frank Knight invokes the term ‘Bourgeois Virtues’.

I flipped through my copy of McCloskey’s first volume, searching for a link to this text or some other connection between Knight and the term. No hits.

The evil has been that on one side the economists have taken for granted the virtues of the economy, management and thrift, while the ethicists have tended to ignore or even to disparage them. This latter attitude is no doubt in part a result of the way in which the economic side of life is treated in the Judeo-Christian religious tradition. In any event, the modern mind finds it self-evident that not merely progress but civilization itself depends upon the general recognition and the conscientious practice of these ‘bourgeois virtues’; yet they have not been made philosophically respectable and one of the crying needs of the hour and for the future is that this should be done. 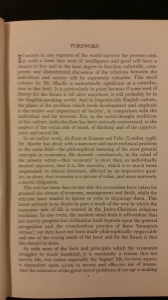