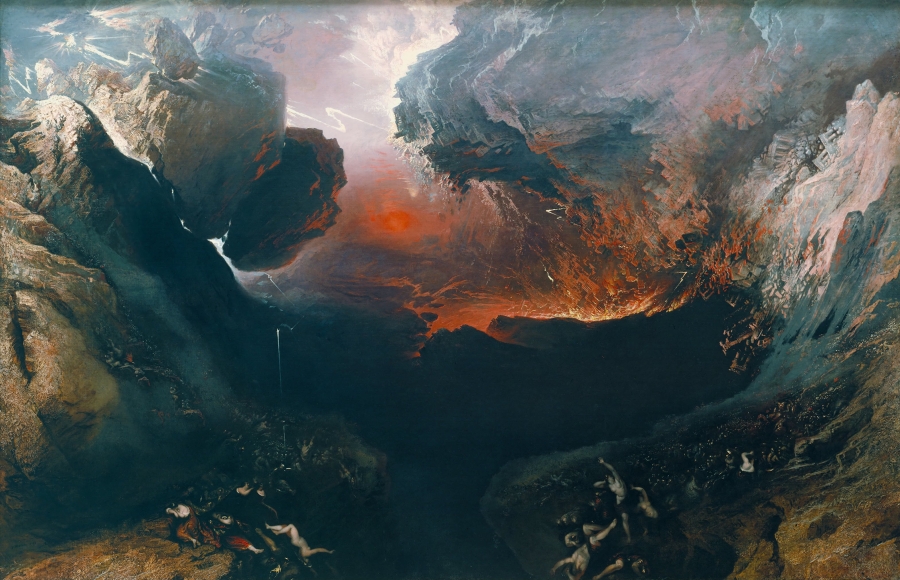 Featured image is the End of the World, by John Martin

Fellow sweet talker Sam has pointed out the surface similarity between the case for space exploration and the case for anti-globalisation.

That is, earth, being our only planet, is vulnerable to certain extinction level events, thermonuclear war, environmental degradation , super-AIDS and the always popular death from the skies, and given that it would be nice for the species to continue existing we should seek out an alternate planet to live on to double the chances of at least some humans surviving. Similarly, given that there is increasingly only one, global economy on which we all depend for meaning and sustenance, it might perhaps make sense to erect some barriers, so that, to give a hypothetical, dodgy securitisation practices in the United States doesn’t obliterate the seemingly unrelated economy of a small island nation. However these risks interact with the rest of the world in fundamentally different ways, and need to be managed differently.

While in school I did an internship at a local electrical utility. Most major urban networks at that time were radial, isolated, and manually redundant, that is power comes from a central distribution transformer and is distributed outwards like spokes on a wheel. Under normal operation there is no active connection between these different islands, however the infrastructure exists and is in place to connect them with the throw of a switch by the operator or command centre.

The advantage of linking the networks together is that when something goes wrong in one network, the other networks can pick up the slack. If a tree hits a major line, and causes a blackout the operator can flip a few switches and get power restored to many of the affected houses in a short period of time. Power to critical infrastructure, like telephones, will be connected to batteries so that if primary power is lost, the batteries will automatically kick in and the system as a whole still works. Telecoms even started installing battery packs at the customer locations, as fibre has overtaken copper as the technology of telecommunications and it was no longer possible to use the telephone wire to power the telephone if your house loses power. This is redundancy, and it is the primary tool we use to keep networks resilient to failures.

The increasing linkages that come with globalisation often operate in the same manner. If there a drought in Florida, oranges can be imported from a different area of the globe. If a major flood destroys the garment industry in Bangladesh other workshops in Africa and Indonesia can be found. Further, since expertise and equipment can be deployed globally, if a disaster destroys a major or sole supplier of a particular good the nexus can be reconstituted elsewhere. It also allows a greater variety of substitution goods, so that if a blight destroys most of a year’s cotton crop, even in all areas, we can substitute linen, or silk, or synthetics and still produce a workable garment.

So given the advantages of linking these networks together, why didn’t we make the links in our power network? There are two good reasons. The first is that when you want to take a particular area down you only need to throw one switch to do it, so that an operator wouldn’t throw a switch and assume that the network was down, only for power from another source to come back in without their knowledge, potentially fatally. The second is that it limits the damage done by any individual fault. If a crow lands on your transformer, only the transformer, and the things downstream of the transformer will be taken down, the rest of the network is oblivious. (The crow is also oblivious, as his internal organs are plasma. RIP crow, I didn’t want to save that report anyway).

It’s the second point that is most relevant here. Near the beginning of my term at the utility we had planned for one of the transformers to go down while we did maintenance on it. The linesmen closed the relevant switches, linking the two networks together, and then got in the truck to open the switches that isolated the transformer to be taken out of service. While they were driving, a tree hit a major line, blowing protective devices on both transformers and melting the wire. What would have been an isolated fault taking out about a third of the city now took out the entire city for the better part of a half a day.

The increasing interlinkage of the global economy leaves it vulnerable to these kinds of events. A problem that wipes out the banking sector will affect the global banking sector instead of being contained in a national banking sector. A pest that destroys a particular tree will spread across the globe, destroying trees all over the globe instead of just on one continent. So why not maintain the same barriers that other networks do for their safety?

First, the networks had certain barriers, but were never actually islands. The linkages between the networks were all in place, waiting for the right moment to be activated. But the global system is closer to a biological than a mechanical system. Linkages have to be grown, and having grown be used to be strengthened. There isn’t a standby export infrastructure waiting for the command centre to throw the switch, there are actual exporters and actual ports and actual longshoremen and truckers and roads that need to be maintained trained and built, and can only be built by being used. Movies need distribution channels and rightsholders working in concert which takes time and skill. The redundancy required for resilience needs to already be in place and operational.

Second, it is easier to cut a connection than to make a new one. The vast majority of systemic faults don’t begin as systemic faults. They begin as relatively minor, localised faults which, when not handled appropriately, escalate into larger faults and sometimes spread, what engineers would call failure cascades, but in finance is usually called contagions. Handling these problems properly means acting quickly to contain them to as small an area as possible while they are still small, or limiting their ability to grow. This doesn’t mean the creation of barriers, but retaining the ability to create barriers quickly. Figuring out how to detect small problems and handle them before they become big problems, and making sure the disease is worse than the cure, is the majority of modern engineering work, and an essential part of any regulatory apparatus. When done well it can be accomplished in a way that the remaining equipment doesn’t even notice, and with minimal downtime for the affected equipment.

Finally there are some kinds of problems that simply can’t be dealt with internally. A well designed, fully parallel battery back-up won’t save you when the operator comes in drunk and runs over it with a forklift, or when a rattle snake decides to make its home inside and the groundskeeper, being a good west Texas boy decides this is a problem that should be solved with a shotgun. (The snake was reportedly delicious).

The only way to deal with this is reduce, as far as possible, the number of systems that will act as single points of failure, by creating parallel systems as far away as practicable. It is these sorts of cases that earth 2 is designed to protect against, and in which the logic of anti-globalisation is strongest. There is one major difference. Earth 2, by its distance, can’t help you when something goes wrong. The species survives, you’re still screwed. By contrast access to rice grown in Thailand can help you, and cutting yourself off from it can decrease global systemic risk only by increasing the chances that a local survivable risk is turned into a local catastrophic one.

One thought on “Black Crow Events”