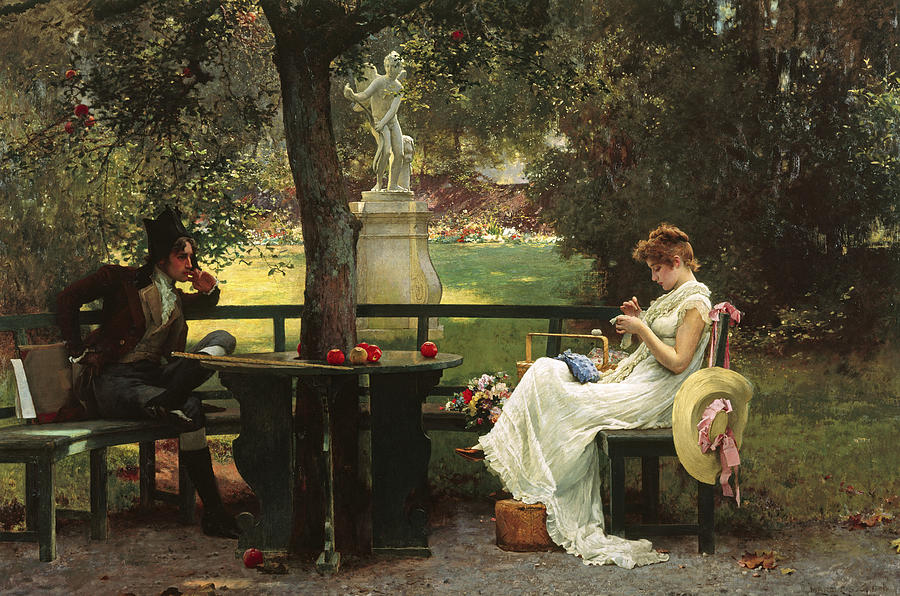 Featured image is In Love, by Marcus Stone.

Last year, while struggling to come to terms with some ugliness close to home, I wrote about acceptance.

Of its opposite, rejection, I said this:

Rejection is to deny either the existence or the legitimacy of what is rejected. The idealist rejects the argument of the economist that the optimal number of murders, rapes, thefts, and traffic accidents is greater than zero. He denies the existence of fundamentally ineradicable problems.

Let us say that we are human beings who strive for order, but also for justice, for generosity, but also for prudence. Acceptance means recognizing that there are fundamental gaps in what we can accomplish in this striving, and that those gaps are often enormous—but having a heart that is at peace, nevertheless.

Recently I came across a discussion by Charles Taylor of Dostoyevsky on this very topic, in the former’s terrific book Sources of the Self. I find I’m unable to get it out of my head.

Dostoyevsky’s vision of rejection is something that people who have the highest moral sensibilities are the most vulnerable to, precisely because they are most sensitive to the ugliness in the world.

Rejecting the world seals one’s sense of its loathsomeness and of one’s own, insofar as one is part of it. And from this can only come acts of hate and destruction. Moreover, these radiate out from one in a chain, a kind of negative apostolic succession, as one inspires others through this loathing to loathe in their turn.

Dostoyevsky’s rejectors arc “schismatics” (raskolniki), cut off from the world and hence grace. They cannot but wreak destruction. The noblest wreak it only on themselves. The most base destroy others. Although powered by the noblest sense of the injustice of things, this schism is ultimately also the fruit of pride, Dostoyevsky holds. We separate because we don’t want to see ourselves as part of the evil; we want to raise ourselves above it, away from the blame for it. The outward projection of the terrorist is the most violent manifestation of this common motive.

But acceptance is the only way to heal from the wounds inflicted by an ugly world:

What will transform us is an ability to love the world and ourselves, to see it as good in spite of the wrong. But this will only come to us if we can accept being part of it, and that means accepting responsibility. Just as ‘no one is to blame’ is the slogan of the materialist revolutionaries, so ‘we are all to blame’ is of Dostoyevsky’s healing figures. Loving the world and ourselves is in a sense a miracle, in face of all the evil and degradation that it and we contain. But the miracle comes on us if we accept being part of it. Involved in this is our acceptance of love from others. We become capable of love through being loved; and over against the perverse apostolic succession is a grace-dispensing one[.]

The idea that greater transparency will make the world a better place is pretty popular these days. And yet it seems that massively expanded access to information has largely turned public discourse more vitriolic, and less forgiving.

To be exposed to so much of the ugliness of the world would be challenging in any time. But I think our current situation makes us particularly vulnerable. We are ideologically inclined to let “failure set the agenda,” and we lack a shared framework to justify wholeheartedly loving the world.

Growing up is a process of moving from earnest naiveté to accepting responsibility for being a part of the world. Few of us get to the wholehearted loving of the world, ugliness and all, that Dostoyevsky’s most saintly characters manage to achieve. And all of us feel the pull of rejection when we are faced by the world’s ugliness.

But each of us is capable of accepting the world, with its wonders and its horrors.