In pre-modern, small scale societies, trust was multi-lateral: Everyone knew everyone. This was robust to any one individual being untrustworthy, but had real trouble scaling. If someone new came to town she would have to earn the trust of every node in the network—a problem that grew in proportion to the population.

So in the modern era (and long before it as well—the modern era is just when we mastered it) we replaced multi-lateral networks of trust with bi-lateral trusted intermediaries. This was an incredible innovation from the perspective of scaling cooperation. Persons A and B could trade and borrow from one and other while being total strangers, given their mutual, bi-lateral trust of C. 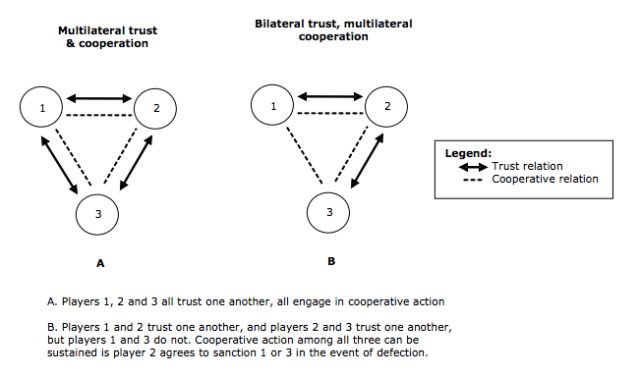 Who or what is C? C has represented many different things throughout history. The state. Markets. Banks. MasterCard. Uber. With the help of lots and lots of Cs we were able to scale from simple gift economies to the complex and deeply integrated society we have today.

This change occurred must faster than our brains could adapt. As apes evolved for smaller scale society we have therefore not extricated our craving for microcosms of multi-lateral trust: family, friends, community, and so forth. This seems to be what social scientists are measuring when they report some countries as “higher trust” than others. These are societies that have, to varying degrees, decentralized the bilateral institutions in order to promote greater multilateralism. In doing so, these societies trade-off some scale efficiency and assimilative capacity in exchange for greater robustness and, presumably, reduced feelings of social-alienation.

Yet if this is right it is incredibly misleading to call such societies “high trust” as if the others are not. Rather, they are high in a particular kind of trust. It’s only the bilateral model that lets two complete strangers engage in a multi-phase, high stakes project without having to trust each another one bit. Instead, each trusts the underwriting of the intermediary institutions. There is the same amount of effective trust, as manifest in productive cooperation, but it comes with much less cognitive burden. You don’t have to keep mental track of your colleague’s reputation, or whether their ideological and cultural preferences match yours. Nor do you have to worry about collecting debts or punishing bad behavior. That’s all been offloaded and outsourced. The trust, in other words, still exists, but is embodied in the environment and institutions, rather than in our heads.

Even in so-called high trust societies, this latter sort of trust is still doing most of the work in the background. We just don’t notice it by design. Conversely, many societies measured as low trust may in fact be quite high in multilateral trust, but in a way that is localized to pockets without the bilateral institutions needed for effective interfacing.

Thus when a country is described as low trust I stop and ask myself “what sort of trust?” There may be a lot of virtue in an, as measured, low trust society if it better facilitates the rapid integration of newcomers, a greater diversity of lifestyles, and larger scale cooperation. After all, impersonal interactions are not a bad thing. They’re the stuff of civilization.