Is The Simpsons the most Christian show in the history of TV?

This question came after I asked fellow Sweet Talker Dave a related one: is The Simpsons the last show to feature a regularly churchgoing family?

To which he responded: can you think of any other popular TV show in the entire history of the medium which did so?

I put the question to Twitter and received a handful of replies. Most, however, involved families or characters that were nominally churchgoing, but the church was kept firmly offstage. In The Cosby Show, for instance, church is a place the Huxtables are occasionally coming home from, and that is it.The more we discussed it, the more bizarre this seemed. Certainly our culture is more secular than ever now, but that was hardly the case from the start of the history of TV. People offered several theories, but I’m going to run with the one I found most interesting:

@adamgurri TV Standards and Practices prior to the 90s had strict requirements for reverent portrayals of religion. https://t.co/wvadKsRTSo

Stephen is referring to the following:

I think “reverent portrayals” sums this up nicely.

The bread and butter of TV from the beginning have been portrayals of ordinary American life. By making church purely an object of reverence, it became something bigger than ordinary life. So the center of gravity for shows became work and the home, almost exclusively. The role of church was relegated to special story arcs that required reverence or moral dilemmas or crises of faith, something that would grow tiresome if it were a regular feature of The Andy Griffith Show or Mary Tyler Moore.

The Simpsons, in its irreverence, actually normalized churchgoing—a strange turn of phrase, given how normal churchgoing still is in America! But relative to TV before and since its inception, “normalizing” seems the appropriate word.

Church is a feature of ordinary life in Springfield. People go there every week. Children find it boring. Adults often do, too. Reverend Lovejoy often displays a frustration with his flock expressed with dry and sarcastic wit. The church and even Lovejoy play important roles in episodes specifically about faith or moral dilemmas, but for the most part, it all just fills in the unassuming background for the Simpson family’s ordinary life. 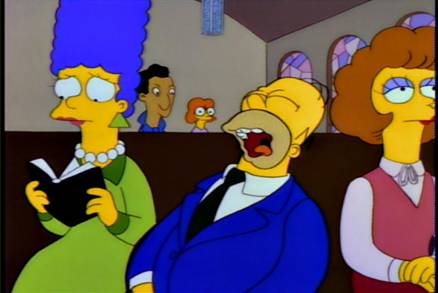