He screamed in our faces, and the crowd exploded. Greg Puciatio stalked across the stage, his low grunts and shrieking howls resounding. He threw his body at the edge again and again, while Ben Weinman, thrashing the air and shredding notes, hurled himself backwards off the amplifiers. Meanwhile, the bass and drums beat down and slammed in off-kilter jolts. Bodies crushed around me and people leapt from the stage, over and over. The speakers roared and the sound ripped at my ears. This was my introduction to the live show of The Dillinger Escape Plan, who stopped in Israel on their farewell tour. I’d long been a big fan of their music, but even as a hardened devotee of all things weird and heavy, this was a new, mind-blasting experience. Dillinger, infamously known as “the most dangerous band on the planet”, is defined by always taking their live experience to the maximum. They make music that doesn’t just sound difficult and abrasive, but through their performances, they take pride in making discomfort manifest for themselves and the audience. I had a great time.

It was walking out, my ears still ringing from the feedback, that I started to more deeply grasp the bewilderment and occasional physical steps backward that have become common reactions of people hearing about some of my favourite music.

Extreme or experimental music defies conventions, through breaking taboos or departing from more accessible forms. From death metal’s embrace of chromatic scales and highly technical instrumentation, to the odd time signatures, squealing lines and abrupt breaks in free jazz, the complex (dis)chords of underground music don’t make things easy for you. As Keith Kahn-Harris notes in his book on the topic, extreme metal reaches areas that begin to depart from what we would traditionally call music at all. The lyrics emphasize the dissolution and reconstruction of both body and mind in intense but varied ways, ranging from horror movie violence to heavily existentialist themes of bleak yearning and searching.

In general, heavy and experimental music often aims towards sonic violence, or at minimum, real discomfort. It hits you with harsh, twisted sounds, and incorporates a lot of background noise and feedback. This has more value than you might first think. The power of heavy dissonance music is to tear things up. To pull apart the sense of who we are, and what we might be as human beings. In the end, it’s the both the technical precision and the sheer forceful power which allows listeners like me to transcend the prison of our expectations and judgements, to float upward and be lifted high, out and beyond our heads. When we get back to earth, we are filled with only ourselves.

Although leaning heavily on specific guitar riffs (or in the case of jazz, saxophones and trumpets) and drum beats for orientation, the sheer attack of the music aims to displace you and rip up your feeling of groundedness.

The riffs in ‘43%’ are jagged and cut off sharply. The guitars use a janky, scraping tone and repeat in very fast, variegated patterns. The drums hit heavily and move in very swift repetitions, almost resembling machine guns. The vocals are piercing and fierce. The time signature shifts constantly. Overall, the attack and disorientation is almost overwhelming, and rarely lets up for more than a few seconds.

Or listen to “Bonehead” by the experimental jazz group Naked City, led by the legendary composer John Zorn:

Here, the saxophone screams constantly at a very high pitch, sounding almost like an actual person. The drums come in speedy blasts, repeating in staccato bursts. The bass and guitars thunder underneath.

As I mentioned, earlier it is precisely the deconstructing and bewildering elements of heavy and experimental music that give it power. In life, we search constantly for a sense of place, of self-definition. It follows us around in public and often even when we are alone. Every time we step outside our doors we are confronted with the question of what it means to be us. Significantly, the person we appear to be is never truly ourselves, unadulterated. Rather, we invent or create, a person for other people to interact with. The famed sociologist Erving Goffman put it this way:

“The self... is not an organic thing that has a specific location, whose fundamental fate is to be born, to mature, to die; it is a dramatic effect arising diffusely from a scene that is presented.”

For Goffman, the self is a performance, a thing we put on to interact and communicate with others. It is an artificial creation for the purposes of signalling and communication. However, not only is it a character we invent for others, it’s someone that we make up for ourselves, as well. We give ourselves an image of who we are, a person that exists in our minds for us to refer to and say, “This is me”.

Or, as Goffman writes:

“Our sense of being a person can come from being drawn into a wide social unit; our sense of selfhood can arise through the little ways in which we resist the pull. Our status is backed by the solid buildings of the world, while our sense of personal identity often resides in the cracks.”

To a large degree, the uniqueness of these musical forms is in the conscious rejection of comfort and stability, boundaries and definitions. It says that to some degree, the quest for identity, while important and necessary, is one that will never be fully realized, and will always in so doing, limit how we experience the world. Dissonant and difficult music is a sound that is seeking (if never quite reaching) a regained sense of the untamed and the unbroken, away from formulaic and standard imagery.

To fully grasp this, we need to go beyond the mere content of the songs on records. For complete absorption, we must get off the sidelines and into the pit.

“These floods of you are unforgiving/
Pushing passed me spilling through the banks/
And I fall/
Faster than light and faster than time/
That’s how memory works/
At least in the dark where I’m searching for meaning/
When I’m just searching for something/
I want out.”

Moshing, crowd surfing, stage diving, and the infamous “wall of death” are key parts of most ‘heavy music’ shows. Moshing, often stereotyped as just violent collision, is better understood as a complex, extremely kinetic dance. It forces participants out from themselves. People push into each other, together and apart, in visceral and often abrupt ways within an enclosed area. It creates a sensation of freedom from being wholly immersed in our own space. Like the noodly meanderings of the artiest jazzers, moshing keeps ripping things up and starting again.

However, unlike in electronic dance parties or techno raves, moshing isn’t quite about the total loss of agency. While in the same area as EDM in the search for transcendence, moshing is a step sideways from the totality of the ‘losing your mind’ ethos. In moshing, there is a unique concentration on building and harnessing mental and physical energy, and a focus on deep emotional engagement. Alissa White-Gluz, vocalist for the band Arch Enemy, has compared it to yoga, with the flow and intensity of movement almost reaching a deep meditative state. Thus, moshing is far more like an extreme sport or a complex and engaging exercise, like Tai Chi, rather than the travel companion of an drug trip, dissolving all our mental furniture.

A key moment in any mosh is the transition to the ‘circle pit’ as people run together in a messy oval. We flail our arms and legs out, arms slapping against the air, and here and there, smacking a chest or neck. Heads windmill and hair flies. The ground shakes and people bounce into and off each other, in ways that take little notice of sexuality, race, gender identity, or anything else. It feels like an updated tribal ritual, pressing and pulling against one another in sacred patterns. We are the pit, and the pit is us.

This feeling has a strange dualistic quality. As things intensify, I remain me, but am also somehow at one with other things and people at the exact same time. This produces an additional and valuable element- the feeling of engaged anonymity, of involvement with others without having to create a complete persona. In becoming each other, we lose our carefully shaped self-images.

This kind of hyper focused extremity has the net effect of creating a kind of liberation. The overwhelming sensations of often highly complex sound, combined with the directness of the pit, break up the everyday feeling of inhabiting ourselves that we usually experience.

One of my favourite ways of talking about this can be found in Iris Murdoch’s discussion of what she called “techniques of unselfing”, in her work The Sovereignty of the Good:

“We are anxiety-ridden animals. Our minds are continually active, fabricating an anxious, usually self-preoccupied, often falsifying veil which partially conceals our world. Our states of consciousness differ in quality, our fantasies and reveries are not trivial and unimportant, they are profoundly connected with our energies and our ability to choose and act. And if quality of consciousness matters, then anything which alters our consciousness in the direction of unselfishness, objectivity and realism is to be connected with virtue.

The most obvious thing in our surroundings which is an occasion for ‘unselfing’ is what is popularly called beauty…I am looking out of my window in an anxious and resentful state of mind, oblivious of my surroundings, brooding perhaps on some damage done to my prestige. Then suddenly I observe a hovering kestrel.

In a moment everything is altered. The brooding self with its hurt vanity has disappeared. There is nothing now but kestrel. And when I return to thinking of the other matter it seems less important. And of course, this is something which we may do deliberately: give attention to nature in order to clear our minds of selfish care.”

The pit is a physical mirror for the music, in which the extreme and the overwhelming blast and tear you apart. In that moment, there is a sense of no more me, no fully constituted self, but merely fragments that perhaps, you could call a person. And yet, as I become unmoored, I am swept along with the rush of the music and the push of bodies back into myself. I am rebuilt, remade and reconceived. I discover a sense of solidity and permanence, made with coarse cement and mortar, jagged metal and stone. As I am remade, the artifice of the self and the project of being A Person is pushed aside. For a brief time, I am in some sense Truly Me.

It shouldn’t be surprising then, that different studies find that heavy music is, contrary to stereotypes of angry and misled teens, a genre that plays an important role in mental health. Metal and heavy music are excellent at contributing to instilling calm, feelings of catharsis, and positive emotions.

For me, the painter Dan Witz expresses this experience in the most direct form, through his Rembrandt-esque representations of New York Hardcore, capturing in depth and detail, the rough glamour of the moment. As Witz describes, the hardcore show is (borrowing from Walt Whitman) a kind of ‘barbaric yawp’, a shouting protest, petitioning the empty sky above us. It yells out at the blackness of the void, and through it, becomes full. So, what is dissonance for? It is simply a reminder that sometimes, through embracing the confusion, the chaos and the madness, we might finally find peace. 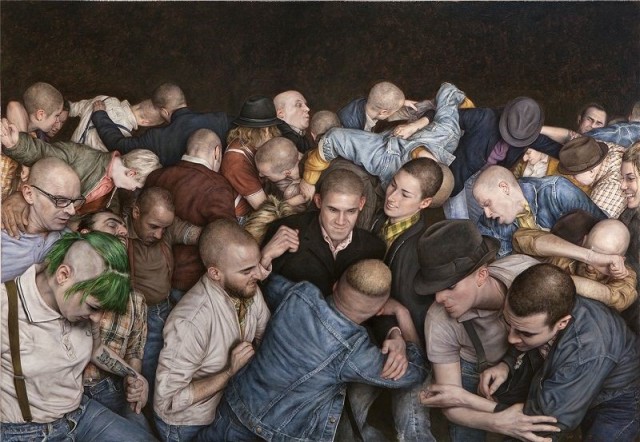 One thought on “The Zen of Chaos”