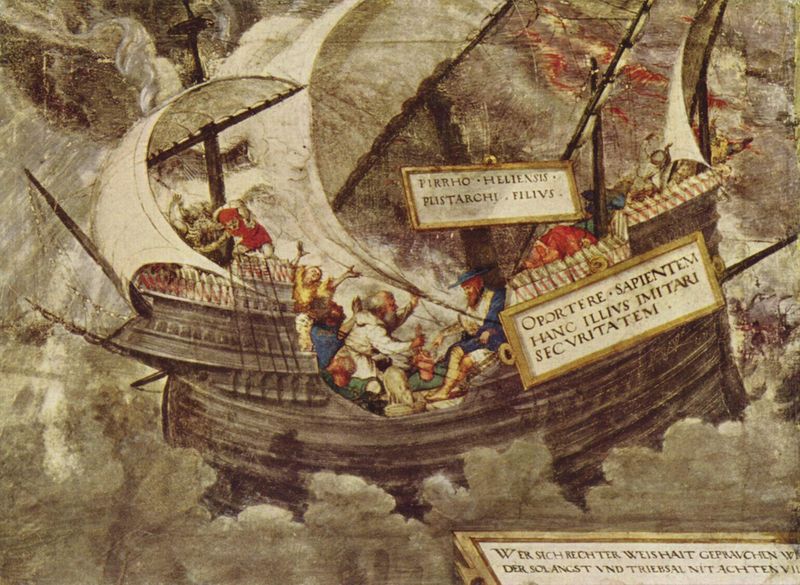 Featured image is The Philosopher Pyrrho from Elis, by Petrarcha

The Greek term skeptikos means, not a negative doubter, but an investigator, someone going for the skeptesthai or enquiry. As the late sceptic author Sextus Empiricus puts it, there are dogmatic philosophers, who think that they have found the truth; negative dogmatists, who feel entitled to the position that truth cannot be found; and the sceptics, who are unlike both groups in that they are not committed either way. They are still investigating things.

In his autobiography, Charles Darwin lamented that he used to love poetry, but could no longer “endure to read a line” of it. He complains:

My mind seems to have become a kind of machine for grinding general laws out of large collections of facts, but why this should have caused the atrophy of that part of the brain alone, on which the higher tastes depend, I cannot conceive.

I think economics trained me to think this way. When I began a fresh foray into philosophy a couple of years ago now, I approached it from this stance. Every book went into the grinder, to mash up and join with others in the cage of general laws. I steamrolled my way through book after book; when I couldn’t follow them I just pressed on so I could get to the next one. There was no thought of reading for pleasure or respecting the book before me like I might respect a partner in conversation. What is more rude than completely dominating a conversation without consideration for the other person?

But I launched into reading as if quantity equaled quality, as if I could become an expert simply by reading a lot.

I did, indeed, learn a great deal. But for the last year or so, I felt that I had stumbled on authors who helped me grow in an important way—they helped me to see more clearly a wide and yawning ignorance in myself, including an ignorance of how far the ignorance itself extends.

Increasingly, I wonder: isn’t this what philosophy is supposed to teach? For all the flaws of the historical and fictional Socrates, don’t we still admire him for saying that he only knew that he knew nothing?

To someone who engages in dialogue only to prove himself right and not to gain insight, asking questions will indeed seem easier than answering them. There is no risk that he will be unable to answer a question. In fact, however, the continual failure of the interlocutor shows that people who think they know better cannot even ask the right questions. In order to be able to ask, one must want to know, and that means knowing that one does not know.

I have not read Sextus Empiricus, nor am I an expert on ancient skepticism. My understanding of it is mediated through several of the works of Julia Annas.

When I first encountered her summary of them in a section of The Morality of Happiness, it seemed straightforwardly self-defeating. Sextus Empiricus in particular offers skepticism as a path to the good life—you end up suspending your commitment to beliefs after seeing that there are as many good arguments against as for any of them. As a result, you obtain a state of tranquility, since you are no longer anxious about defending beliefs you hold dear.

That’s interesting, but how can you suspend your beliefs but also believe that suspending beliefs results in a tranquil, good life?

Lately, however, I’m beginning to think I gave short shrift to the skeptics. Take this remark from Gadamer, for instance:

However clearly one demonstrates the inner contradictions of all relativist views, it is as Heidegger has said: all these victorious arguments have something of an attempt to bowl one over. However cogent they may seem, they still miss the main point. In making use of them one is proved right, and yet they do not express any superior insight of value. That the thesis of skepticism or relativism refutes itself to the extent that it claims to be true is an irrefutable argument. But what does it achieve? The reflective argument that proves successful here rebounds against the arguer, for it renders the truth value of reflection suspect. It is not the reality of skepticism or of truth-dissolving relativism but the truth claim of all formal argument that is affected.

Thus the formalism of such reflective argument is of specious philosophical legitimacy. In fact it tells us nothing.

Or, to summarize: sure, skeptical arguments undermine themselves. But are they right?

Sextus Empiricus puts heavy emphasis on the difference between appearance and knowledge. His claim is that even when we have rejected having arrived at the latter, we are able to live our lives just fine because we just act on what appears to be true.

This calls to mind Ryan’s treatment of paradoxes.

A paradox is defined to be a statement that is “seemingly” or “apparently” self-contradictory. But their main problem is that they don’t really exist. No statement can be both true and false at exactly the same time in exactly the same way.

Apparently, there is some moment when we know that a problem really exists or does not, beyond what appears to be the case.

This calls the following in mind: I look into a room and think it is very large. Only then I notice that there are large mirrors placed strategically in order to make the room appear larger than it is.

At this moment, does reality disclose itself to me, or does the room simply appear smaller than it did a moment ago, and the mirrors seemingly play a role in the previous appearance?

Ryan seems very certain that no paradox can truly be a paradox, in the sense of being impossible to make harmonious. He bakes this certainty into his definition, which makes his next statement unsurprising:

Paradoxes capitalize on the fact that language is more flexible than logic.

Indeed, language is more flexible than logic. Rather than putting it this way, I’d say “we gain the illusion of certainty by capitalizing on the inflexibility of logic.” Because nothing much is gained by logic alone. The disparaging of language’s flexibility, a common trope, always manages to overlook how all understanding depends upon it. We cannot deal in either logic or mathematics without using language to talk about what we’re trying to do with it. Mathematicians do not communicate with one another in pure mathematics. Much less do logicians communicate in pure logical propositions.

So it’s very easy to write off paradoxes as simply an irrationality inherent in the flexibility of language. But if we have not yet grasped the nature of language, is this not overly hasty? Is it not possible that the nature of language will turn out to either vindicate the paradox, or show that it points to some larger, non-paradoxical truth? In short, might it not simply appear to be the case that paradoxes are an artifact of language?

According to Julia Annas, the Academy, founded by Plato, turned to skepticism around the third century BC. Unlike Sextus Empiricus, who was a Pyrrhonian skeptic, the Academics did not advance a positive vision of the good life. Instead, they were taught to argue ad hominem—no, I don’t mean they used derogatory words on the Internet. This was ad hominem in the old, good sense of only arguing from the opponent’s premises.

Academic skepticism, in short, was not a theory, but a practice. You can tease out what the implicit assumptions were, in that they always aimed at aporia rather than solid conclusions. And so in a way they were of a kind with Sextus Empiricus, they simply did not offer a theoretical defense of it.

It seems to me that the practice of philosophy ought to move much closer to this approach. Right now it seems as though, in the worst cases, philosophy is treated as a menu of dogmas to choose from. In the more common cases, students do learn a great deal, but come away with a sense of how much more they know on the subjects than non-philosophers.

If you study philosophy and become more certain at the end of it, I’m inclined to call this a failure.

I should say that I think it’s productive to engage in ambitious philosophic system-building. This appears to me to be an important part of how we struggle to understand the world.

But this needs to be tempered with a humility far more radical than we moderns seem inclined to embrace, in a time where speaking of the mystery of existence is treated as vague hand-waving.

It appears that we can get very far with appearances—with experimental trials, theory, and critical and collaborative communities, it appears we’ve been able to achieve extraordinary results.

I just beg you to remember the qualifier “appears.” Remember that the evidence is finite, and the cleverness, memory, and lifetime of individual human beings is even more so.

Remember that there are always potential scenarios, most of which you have not even thought of, that could invalidate everything you believe you know.